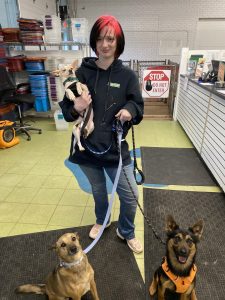 Trinity is a two-year-old shepherd mix who came to Downtown Dogs through an overcapacity rescue group. It was immediately clear that Trinity was a special pup and would be an extra-challenging dog. The first night Trinity was with us, she was extremely fearful and reactive and refused to leave her crate. After hours of attempting to lure her out using treats, positive reinforcement, and our experience with handling fearful pups, our team eventually coaxed her out of her confinement. It took a lot of time and patience to build trust with Trinity. But over time, a bond began to emerge.

Trinity spent five months with us at Downtown Dogs. There were a handful of breaks at foster homes, but those didn’t go well and never lasted more than a week. The stress of constant instability further triggered Trinity’s reactive behavior and difficulty around new humans and dogs alike.

After months of struggling with boarding and unsuccessful foster situations, the rescue organization that Trinity was with had exhausted their resources and ultimately chose to make the gut-wrenching decision to have Trinity euthanized.

“There was simply NO WAY that we were going to let a dog in our care leave here to be euthanized,” said Ralph Bernstein, owner of Downtown Dogs.

So, the business officially adopted Trinity! We foster more than 100 dogs every year, but this is the first time we’ve officially adopted one. Our intent was to keep her at Downtown Dogs while working with other rescue resources to find her a suitable permanent home. 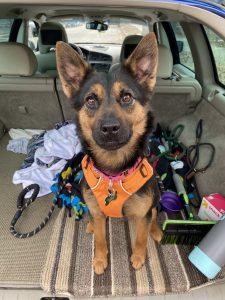 Bernstein added, “Trinity was a wonderful dog here but being boarded for months on end is extremely challenging for any dog. Trinity’s reactive behavior was getting worse, and we wanted to find a situation where she could thrive because we could see the potential in her.”

That’s when Downtown Dogs’ employee, Megan, stepped up to provide a forever home to Trinity. Megan had spent hours working with Trinity at Downtown Dogs, building a connection while helping her adapt to meeting new people and pups. After a successful trial foster experience, Megan decided to keep Trinity.

It took time, but slowly Trinity started to get comfortable in her new home with Megan and her other pup, Cole. Initially, Trinity and Cole could not even share the same space. Both pups are similar in temperament, which made their first interactions quite tense. Using the knowledge and experience she’s acquired over three years working at Downtown Dogs, Megan worked to introduce the two standoffish pups using positive experiences and treats. Soon Trinity began to thrive. Her temperament and demeanor dramatically improved  and she loves her new home with Megan and Cole. Megan is now able to walk both dogs together, and even include her sister’s dog, Frankenstein, in the mix now and again.

Lindsay Bein, Downtown Dogs’ General Manager said, “There are so many wonderful things about Downtown Dogs including how we take extra care to train our team, but seeing one of our employees go above and beyond and open their heart and home to this dog is truly amazing. It is heartbreaking to witness what rescue organizations and dogs in need are going through right now with stressed resources. Every dog deserves a chance and often only needs time and love to thrive. I’m so proud of Downtown Dogs’ ongoing commitment to helping rescues like Trinity until they secure their forever homes.”

The advice provided is based on many years of experience as dog parents and operators of one of the largest and longest established dog daycare and boarding facilities in the Twin Cities. Always consult your veterinarian. When not sharing advice, our dog bloggers — Frannie, Lyle, and Helen — share a space with their people, Downtown Dogs owner Ralph Bernstein and his wife, Abbe.